DUCKS AT THE RANCH
(RAISING DUCKS FOR EGGS)

A couple of years after starting our garden in Wellington, we decided it might be time to add some chickens, for eggs and perhaps for their meat. As we began researching chickens, how to raise them, what kind of housing they would need, what breeds we might want, and so on, we ran across some references to ducks, in books and on blogs. We began to think that ducks might be for us. There are several reasons we chose ducks:

All things considered, the verdict for us was DUCKS. Since then, we’ve raised three different batches of ducklings and have begun raising the fourth in August 2019. First, Welsh Harlequins, at our home in Wellington, 2011. Second, Golden Cascades, here in Guffey, 2015. Third, also in the high country, a “six-pack” consisting of two Welsh Harlequins and one each of: White Layer, Cayuga, Fawn & White Runner, and Chocolate Runner – 2016. 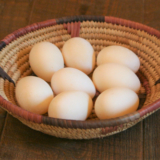 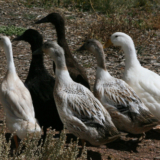