2017-18 GARLIC & SHALLOTS
The first garlic & shallots were planted the fall of 2017 for the 2018 summer season. I ordered a combo pack from Peaceful Valley, with Early California, Red Russian, Music & Elephant garlic, along with some French shallots. The garlic did well and by mid-August I could have harvested it. However, I was a bit slow to do so, then I broke my hip and was out of the garden for a while. Tim harvested the garlic in mid-September. Most of it was still good, but some had obviously been in the ground too long and the outer edges had no papery skin and was unusable–I was able to cut it off and use most of those outer cloves. The elephant garlic did very well and stored well for an amazing amount of time.

The shallots harvested that year were good and stored well. I will do these again.

2018-19 GARLIC & SHALLOTS
In the fall of 2018 I planted some of the garlic I had grown that year. Since I didn’t have a lot of it I didn’t plant a lot, but wanted to know how well the garlic would do if planted shortly after harvesting it. I should have done some reading on it. None of it grew. I still have not researched this–I wonder if it needs to be cured somehow before planting??

2019-20 GARLIC
I ordered Siberian Garlic from Territorial Seed and Elephant Garlic from Peaceful Valley. These were planted October 7 & 9, respectively, each the day after receiving these orders. The tips sent along with the Peaceful Valley order suggested that garlic should be planted at least 2 weeks before the first frost. That would be about September 1, but yet, they don’t send it until later in September-October. At any rate, I’d planted in October in 2017 and it did fine.

As of MAY 20, most of the Siberian Garlic is up and growing well. NONE of the Elephant Garlic survived the winter. Since I had grown it successfully using the same planting methods and timing in 2017, my assumption is that THIS WINTER was just too cold. The description for the Elephant Garlic is that it “grows best where winters are not too severe.” I suppose I was just lucky that first year. I was quite disappointed that I wasted the $$ and bed space only to have it turn to mush in the soil. At this time I am unsure whether I will attempt it again.

2020 SHALLOTS
For 2020 I started some Ambition F1 Shallot seeds in the summer of 2019 along with some onions I’d hoped would overwinter. They died over our harsh winter along with the onions. I’ve started just a couple of those seeds (5/8/20) to see how they’ll do, but I won’t do a lot because I’m unsure they will make it and I don’t want to waste the seeds or space.

TODAY’S WEATHER
AT THE RANCH

WHAT WE GROW AT HIGH ELEVATION 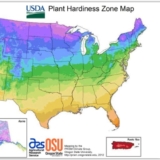